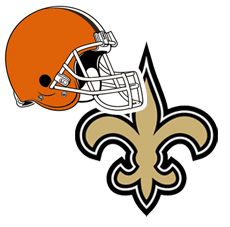 It’s Sunday morning and I am feeling pretty good about those Cleveland Browns. Does that mean I think they’ll win? Of course not! But…

Sunday at 1:00 p.m., the Browns have their home opener against the New Orleans Saints. When a lot of Browns fans saw this game after the schedule was released, they thought “blowout.” Now, maybe not so fast. What changed?

Well, for starters, last week the Browns scored more points in the second half than they did in all games combined for the past two seasons. Okay, that may be an exaggeration, but it didn’t feel that way. A city starved for some excitement on Sundays watched the team move the ball at will against the Pittsburgh Steelers. The excitement gave a lot of fans amnesia concerning the first half of that game.

Also, there are reports that the Saints have a couple of problems that Browns fans are all too familiar with: Missed tackles and a secondary that looked terrible last week against the Atlanta Falcons. Falcons quarterback Matt Ryan threw for 448 yards and 3 touchdowns in a Falcons 37-34 win in overtime. Five different Falcons receivers had at least 50 yards receiving.

So, is it possible? Could it happen? IS THERE HOPE?! Well, first of all, this is the NFL. There is always hope. I just don’t think the Browns have a lot of it this week.

Some people are thinking about last week, looking at a Browns team that scored a lot of points in the second half and a Saints team that gave up a lot of points and yards, and they feel the Browns can win this. I am taking last week’s games with a grain of salt. My preseason feelings about the teams still remain mostly intact.

Let’s take a quick look at both teams.

New Orleans’ defense is being criticized with terms like “bad tackling” and “porous secondary”. Much like the Saints game against the Falcons where neither team’s defense showed up, today may be a repeat of that. Their defense is similar to the Browns defense, though I prefer the Browns front seven over the Saints’ defensive line.

On offense, it’s all about Drew Brees. Anyone want to take a look at the Saints’ wide receivers? If you haven’t already, let me caution you: It’s impressive. From rookie Brandin Cooks through veteran Marques Colston, this is a group that could give any team nightmares. This week, they’re going against a team that will have Buster Skrine as their second cornerback. Ouch.

Some Browns fans are hoping that with this game being played on grass instead of turf the Saints offense will be slowed-down, but I’m not buying it. Football players make plays. Yes, a fast surface benefits a fast team, but I don’t see it taking the wind out of the Saints’ sails. The Saints are more than about speed; they have talented players that would look good in any uniform on any surface. I don’t think the grass will make much difference.

The terms “bad tackling” and “porous secondary” describe the Saints defense, but certainly those same terms describe the Browns defense. I expect the Saints will try a lot of open-space plays against the Browns defense. Last week in the first half, the Steelers got that open space and moved the ball in chunks of yards at a time. I don’t expect the Browns to get the same pass rush against the Saints as they did in the second half against the Steelers, but their rush is not to be taken lightly. They can hurt you. They may see a lot of wide receiver screens and a few swing passes to try and slow the rush down.

I expect the Browns to try controlling the game with the run. The Browns will be without their starting running back Ben Tate. Does anyone really worry about this with what they saw last week from the two rookies Terrance West and Isaiah Crowell? I don’t. They all have a similar running style, so I don’t expect some huge drop-off.

I think their line will be able to deal with the New Orleans pass rush. It’s Rob Ryan in charge of that defense, so expect a lot of blitzing from different angles. Still, I believe the Browns will, for the most part, be ready for that.

What I worry about is the Browns keeping up with the Saints. I don’t think that’s possible. Of course, I didn’t think it was possible last week for the team I saw go into the locker room after a dismal first half to come back out and score 24 points in the second half, all while holding the other team to just 3 points. So I suppose there can be some hope.

But the Saints aren’t the Steelers. The former team is a pick for the Super Bowl (not if they don’t fix that defense, they won’t be) and the latter will be sitting at home when the playoffs begin.

My guess at the final score is Saints 37, Browns 24. I think the Browns will fall behind early and score some points trying to get back in it. You may see a game similar to last week’s: The opponent jumps out to a big lead, and the Browns score some points trying to come back. I just don’t see the Saints’ offense shutting down the way Pittsburgh’s did.

Of course, this is the NFL. Anything is possible.

View all posts by Rich Primo