Movie Review: “This Is Where I Leave You” is good, but leaves you wanting more 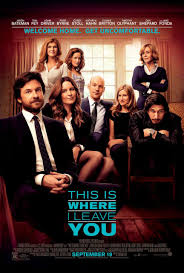 “This Is Where I Leave You” has everything that it needs to succeed: an amazing cast, a director with a comedy track record, a successful novel at it’s root, and a dysfunctional plot that seems to equate with today’s movie-viewing populace. On one hand, the movie turned out to be one that I enjoyed. On the other hand, I couldn’t help but feel as though there was more left on the table.

Before I get to the review, if you haven’t read Jonathan Tropper’s book of the same name, make sure you make the trip to your nearest bookstore and take the time to do so. It’s a fantastically written book, full of nuances and character development that you just can’t match in a two-hour movie. The fact that Tropper wrote the screen-play certainly helped, but reading the book will help fill in the holes that the movie inevitably had. Perhaps that was my fatal flaw with the movie in the end, even though I thoroughly enjoyed the two hours I spent watching this phenomenal ensemble cast do what they do.

The movie centers around the family Altman. Judd (Jason Bateman) is a down-on-his-luck former radio producer who is in the middle of a divorce after he catches his boss cheating on him in the first scenes of the movie. It’s an opening crescendo, and while it doesn’t set the film’s major plot into motion, it does put Bateman right into his wheelhouse as a normal-ish guy planted firmly into abnormal circumstances.

Judd heads back home after he finds out his recently deceased father’s final wish was that his family would come together for “Shiva,” seven days together under the same roof honoring his life. You can most likely connect the dots from there, with the mis-matched family members all returning home to try and find a way to put the pieces back together in their lives, and hold their family together.

Tina Fey seemed a bit miscast as an overwhelmed mother-of-two, married to a way-too-busy husband, who doesn’t showcase a clue of how to be a parent. While there’s no chance in movie-hell that Fey would ever find herself in that situation in real life, her character finds its footing as a de-facto matriarch in the family, and as the former girlfriend to Timothy Olyphant’s Horry, who suffered a brain-injured in a car accident with Wendy many years prior.

The scenes between Bateman and Fey are brilliant however, especially early on in the “Shiva” when Wendy tried to out Judd’s pending divorce. These two were built to be siblings in a movie, and their subtle dead-panned one-liners never cease to entertain.

The House of Card’s Corey Stoll is oldest brother Paul, who has stayed behind to run the family Sporting Goods store. He has married Judd’s ex-girlfriend, and after six years, are still trying to have their first child. Stoll truly is a fantastic character actor, and while he isn’t given much “meat” in this story, his relationship with youngest brother Phillip (Adam Driver) and his wife (Kathryn Hahn) provide him with a couple of scene-stealing moments, as he truly desires to own Dad’s business without worrying about the family ruining what he’s built over the years.

Driver, the youngest brother by a generation, and perhaps the most “It” actor in the film as the future “baddy” in the next Star Wars flick, provides the movie with much of the comic-interludes. As the youngest, he’s typecast as the babied brother a little too much for my taste, but the fact that he brought Connie Britton (Friday Night Lights) into this movie is good enough for me. Phillip is a typical no-direction youngest child, who is dating a much older psychologist (Mom, played by Jane Fonda, is also psychologist), and seems to play the “fly-in-the-ointment” to Paul and the rest. His philandering and aimless ways play a major part of the story, but his singular moments with Fey’s Wendy (thanking her for raising him), and Bateman’s Judd (talking about Dad’s not wanting to kiss, but touch foreheads) bring the moments that you’ll remember the most. Phillip has always wanted to be close to his family, and it’s clear that his acting out over the years was screaming for it. His bonding with the family stands out, and drives home the point that this movie could have done more with the talent provided.

I’d be re-missed if I didn’t mention Jane Fonda, the much-maligned 76-year old actress who truly does steal every scene she’s in, from the first moment she’s in the movie (pulling the air-tube out of her recently deceased husband’s mouth), to her last major scene (a spoiler that I just won’t reveal). Fonda, the person, is a lot of things that aren’t for this review, but as a comedic-actress, she truly is fun to watch. It’s clear that her roles in “Mother-in-Law” and most recently, “The Newsroom,” have set her up as an actress that can make you laugh, even if that’s not what she’s known for.

Fonda’s character, a psychologist-turned-author, is all about attention, and while her family fights for it (or to get away from it) throughout the movie, she never reaches a point where you think the family doesn’t love her. It’s actually fairly brilliant. We learn throughout the movie that what’s NOT dysfunctional about this family is the bond they share with both their mother and their father. While the easy way to go with movies like this is to showcase parents that were horrible in one form or another, Fonda’s Hillary was anything but. As Fey’s Wendy tells Bateman’s Judd, the surprise is that the siblings are unhappy in spite of their parents love. In the end, it’s Mom’s personality that serves as the lightning rod for a family turnaround.

While the ensemble cast does a nice job ebbing-and-flowing, it really is Jason Bateman that holds everything together. As he weaves away from his wife’s affair and towards his family’s angst, it’s hard not to get drawn into his “everyman” persona. While many will knock this movie for its outlandish premise (c’mon, it’s a movie), I admire the casting call that brought Bateman to the role. Bateman is at his best when he’s searching for something more than what he has. In this case, he really doesn’t have a thing, so the outcomes are endless.

Will he find the old bonds that he had with his family, and in particular, will he remember the relationship with his father that he’s clear forgotten about?

Will he find love again with the free-spirit Penny, played by the beautiful and talented Rose Byrne, who will add complication to his life for sure, but may be his last chance at love?

While we understand where it’s going to go with Penny, with Dad, and with the family, it still didn’t stop me from rooting for it to happen. It’s hard not to root for Bateman, whose work I’ve enjoyed since he stole every scene he was in as Derek in the sitcom Silver Spoons.

In the end, the movie takes a solid cast and puts them in scene-after-scene that allows them to show off their talents. The problem, in the end, is that the threads that hold the scenes together just weren’t good enough to make the movie special.

Is it shocking? No. Is it award-winning? No. But will you find yourself smiling and rooting for the Altmans throughout this move?

Jim KNOWS that Albert Belle deserved the MVP, and that the false prophet, Mo Vaughn did not. He thinks that Mike and Greg Pruitt are truly related, because, c'mon, what are the chances? He cries at least once a day, watching videos of LeBron's block, followed by Kyrie's shot. He loves miracles at Richfield, Ron Harper, parking at Gate D, Alex Cole park dimensions, and the glorious Kenny Lofton, who is the REAL Alex Cole. When he isn't writing or talking Cleveland sports for EHC, he moonlights as a husband, father, coach, teacher, Twitter screamer, golfer, runner, and lover of spaghetti carbonara. He also commutes from Raleigh to the North Coast, because it builds character View all posts by Jim Pete