T.J. House has spent a large portion of his development shifting expectations, moving from highly touted draftee to underwhelming prospect, to undervalued commodity before tearing the door down in 2014. 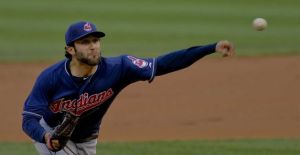 House opened many people’s eyes in 2014, including my own. The Indians enter 2015 with a lot of rotation upside and are likely, barring injury, faced with a tough decision regarding the starting rotation.

The Indians seem forced to choose between House and Danny Salazar, whose abilities I have noted in some detail recently.

This decision is equal parts exciting and equals parts frustrating, exciting in that the Indians enter 2015 with rotation depth that should cause jealousy. Frustrating in that one really strong asset will be toiling in Columbus, waiting for Gavin Floyd or another rotation mate to hit the disabled list.

During House’s rookie season he posted a nice stat line throwing 102 innings with an ERA of 3.35. Among starting pitchers with a minimum of a hundred innings pitched, House posted the 19th best xFIP(xFIP attempts to include only the aspects under a pitchers control, but with a normalized HR/FB rate to league average) in MLB.

This article will look at House from two different vantage points: first it will lay out House’s arsenal, second it will discuss the sort of results which House’s arsenal induces and why it is a perfect fit for Progressive Field.

An important note when discussing the different aspects of a pitchers arsenal regards the interaction between pitches. That is, an individual pitch may not have a positive outcomes as a singular offering does not behave individually, rather it is used in a collection in order to alter a hitters timing and plane of vision.

Essentially House is a three and 1/2 pitch guy relying on a two-seam fastball, slider and changeup. The other being a lightly used four-seam fastball, which has less downward motion than his two-seamer.

The two-seamer first: House throws this pitch about 51% of the time and relies on its sinking action. The two-seamer has very good movement in terms of the x-axis, and the velocity sits between 90 and 91, topping out at 94 MPH. The most important part is its contact product, being that the two-seamer induced 65.1% ground balls in 2014.

Of course, the overall offensive production denote a pitch that is non-dominant, surrendering an OPS of .848.

The second pitch, and by all accounts House’s best offering is the slider. The slider is efficient because it creates two types of favorable outcomes.

House throws the slider about 24% of the time, opponents posted a wRC+ of 44 against the slider, which is unbelievably low. The slider induces a K% of 47% as well as a ground ball % of 62%, we will talk about the importance of inducing ground balls later, as it speaks to the value which House offers.

The last pitch of note is House’s changeup, which he used 15% of the time in 2014. The changeup had some major issues. First, we will denote the small sample we are considering, a pitch used just 15% of the time in a 102 inning sample.

However, it remains something to monitor, that the HR/FB % on his changeup was 36.5%. This means that House threw his fair share of hanging changeups in 2014. However, the changeup, is important as a third thought, in terms of its interaction with the other two offerings it is important, even gradual improvement of this third offering could make house significantly better.

House is designed for Progressive Field:

Speaking generally about Progressive, it has one defining characteristic which most frequently effects batted ball outcomes. Speaking merely in terms of visualizing the field, the little monster, spanning from the left field foul pole to center is high enough to significantly effect the power production of right handed hitters.

In order to shift qualitative analysis to quantitative analysis, we can look at park factor by batter handedness. In order to not assume familiarity with the information, 100 is a neutral park, below is pitcher friendly, and above is batter friendly.

Why is this important for House? He is left handed, which draws a higher frequency of right handed hitters, whose production Progressive Field tends to stifle.

Of course, an adequate criticism would be to point to House’s 17.9% HR/FB in 2014. Among pitchers with a 100 innings, House had the highest HR/FB in baseball.

My response would be that HR/FB fluctuates from season to season but we can expect that this is a significant outlier from what we should expect of House moving forward. Due to only a 100 inning sample, HR/FB rates can be abnormal. This is why xFIP uses the league average HR/FB to consider performance.

This means that we should expect HR/FB to normalize as we move into 2015, which for House means improved performance.

Once again using the 100 inning minimum, House had the second highest ground ball percentage in baseball. Is 60% repeatable? Probably not.

However, as noted earlier, his two-seamer and slider, both his most frequently used pitches, induce ground balls at a remarkable rate. It is likely he will remain near the top in inducing ground balls with a rate over 50% throughout his career.

Ground balls are a tremendous value to a pitcher because they obviously post limited extra base hits, and the BABIPS are also not damaging.

Extra base hits have a large impact on run production, so now we can gather the separate information together. Progressive Field is highly limiting in terms of home runs to right handed hitters, further, House is a ground ball pitcher which limits the possible production of extra base hits.

Thus, if House can prove that he can control the strike zone and limit walks as he did last year, House can be a really solid starter.

House, is an exciting you pitcher with a nice repertoire and Progressive Field is a perfect fit for him to establish himself as a strong big league starter.

Currently an Attorney. I have been fortunate enough to be published at Fangraphs, The Hardball Times, The Athletic Cleveland, WaitingForNextYear.com and Marquette Sports Law Review. Follow @snarkyhatman View all posts by Michael Hattery