With the NFL Scouting Combine beginning on Wednesday, all talk in Cleveland, of course, turns to offensive linemen. Just kidding. It’s yet again time to talk quarterbacks. Yea.

So the Browns have a few things to consider as they prepare for the draft and free agency. The roster has needs all over the place, except maybe at running back and…….no, that’s pretty much it.

But there’s no reason to talk about any of that without first discussing their annual quarterback problem. I have to admit that this year is particularly messy. Let’s break it down.

What are we to make of this guy as the starter for next year? In no way can the guy be counted on. I was of the opinion that you had to let him be the guy in 2015. Now…..I don’t know. I want to say that I do not find it funny that the guy entered rehab. That’s not football serious; that’s life serious. But being life serious, I’m not sure we know what he can give this upcoming season.

Our other quarterback is Conner Shaw, who looked decent in his one start. That does not impress me. I can’t see this guy being higher than 2nd string this upcoming season. I have no problems with him, but I can’t imagine that he is NFL starter-ready.

That’s it folks. Oh yes, Brian Hoyer is on the team, but not once free agency starts on March 10. The question on local radio has been: Should the Browns try and resign him? It’s easy to say no for a couple of reasons: One, he isn’t really anything above serviceable; and, two, you can’t do the Hoyer/Manziel thing again.

But the people who support the move – namely guys who host sports talk shows who need to say something to get people to call in – say that given what’s available at quarterback in free agency, Hoyer is probably the best option. And, honestly, they have a pretty good point, regardless of their motives.

And then there’s the other annual event: Discussing drafting a quarterback in the first round. The Browns have two first round picks (for the record, I’d still rather have Sammy Watkins then the second pick) at numbers 12 and 19. Should they package those two picks to move up and get Florida State’s Jameis Winston or Oregon’s Marcus Mariota? 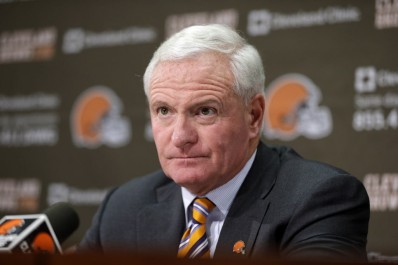 I would love nothing more than to analyze these options and write about the one the team might take, but what’s the point? The way this franchise operates, applying logic to their possible motive is futile. They might do anything. Deciding on the future actions of this team is a crap shoot.

So then, seeing how I watched Draft Day yesterday and saw that Kevin Costner can make great draft moves, I am going to tell you what I would do if I knocked Jennifer Garner up. I mean, was running the Browns.

First of all, Hoyer is off the board. I’m not going through that again and I am pretty sure that he doesn’t want to, either. I’m not basing this on Hoyer’s abilities, but just on the poison that would return with a Manziel-Hoyer II. Not interested. It’s either him or Manziel, and I’m not ready to give up on Manziel. Close, but not currently ready.

Second, we wouldn’t be packaging those two picks. We need players. I’m not turning down two first-round picks.

So, then what free agent would I sign? It really doesn’t matter. Those guys I already listed are all within millimeters of each other. Trying to decide who will have a decent 2015 can best be done by throwing darts at a board.

In my mind, I still say that you have to go into 2015 with Manziel as your starter, barring any real issues he may have connected to his rehab. You have to go all-in with this guy in 2015 and see what he can do. He wouldn’t have to win me the Super Bowl (he won’t) for me to considered him the current future of the franchise, but just show that he is getting what it takes to lead an NFL franchise. This isn’t that end of the 2014 season “you have to see what you have with him” argument that people who just wanted to see him play were making. No, this is, “He’s the starting quarterback until he proves he shouldn’t be.”

If you are going to move up to get one of the two highly-touted quarterbacks in the draft, it would probably take more than 2 mid-first rounders to get up there. But if somehow you could, I don’t believe that you can have Manziel on the roster. Are we ready to turn over the quarterback position again?! Wait. Forget I asked that.

What I would like to see the Browns do is sign Jake Ponder-Vick and avoid the quarterback position in any round above 4th. Start making this team better in other areas. Oh, and don’t freaking get fancy with the picks you make. No trading down to get future assets. I wish the Browns front office for once would be more concerned about the present rather than the future. Just for once.

And no more Barkevious Mingo picks. Please. No projects. There are no extra credit given for style. Just go out and get really good football players to fill the holes that are scattered over this roster.

I know this is far from the last time we’re going to talk about quarterbacks. There’s just no way to ever put that topic to bed. But I do think that the Browns  should put a lot less thought into it than the fans do.

Over the next few weeks, I will take a look at those needs I am talking about and discuss which ones the Browns really need to target.

Until then, try not to lose your voice talking about the quarterback position.

View all posts by Rich Primo