On March 10, the first three episodes of PlayStation’s first (and so far only) original scripted series, “Powers,” debuted on PlayStation Network, free to stream for anyone with a PlayStation system (PlayStation 4, PlayStation 3 or PlayStation Vita) and a PlayStation Plus subscription. New episodes of “Powers,” based on the comic book series of the same name by Brian Michael Bendis, will release every Tuesday starting March 17.

At its most basic form, “Powers” is a cop procedural in a comic book-type fantasy world. In the world of “Powers,” superheroes exist, are called ‘Powers’ for their abilities, although the nature of how the abilities manifest and work seems to be an inexact science at best (Note; I have not read the comic series). Many of the Powers have developed rock star personas thanks to their gifts and heroism, which is often pretty good for their bank accounts, too.

Secret identities are for suckers in “Powers.” In this world, there are people without powers but who want them, called “wannabes,” who hang around those with abilities, hoping to get a taste. Despite the existence of wannabes, Powers are still looked upon with some distrust and scorn, and the show makes it clear early on that even though there are superheroes in this world, none of the Powers are perfect. It’s a tad confusing at first, but the characters in “Powers” don’t seem to understand how things work in their world any better than we do as viewers, so it’s best to let some of the details go and get swept up in the mystery.

The series’ lead, Christian Walker (Sharlto Copley from “District 9” fame), used to be known as Diamond, one of the more-celebrated Powers, but lost his abilities somehow after a clash with Wolfe (British comedy icon Eddie Izzard), an especially deadly (and hungry) Power. Walker now works for the Los Angeles Police Department, in the Powers division, and the show’s first scene gives the viewer a glimpse at how unstable some of these abilities can be, with Walker’s partner killed by a Power and replaced quickly with Deena Pilgrim (Susan Heyward), who serves as our intro and window into how life works when some of the population has superpowers. 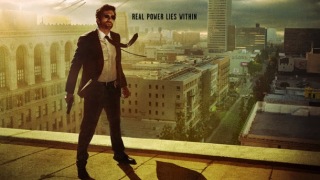 When a famous Power turns up dead in a hotel room with a young girl, Walker and Pilgrim are on the case, and it leads to a few names from Walker’s past as a Power. We’re bombarded with a lot of this information early on, but the world in “Powers” is just as interesting as the characters that inhabit it.

That said, all throughout the first three episodes of “Powers,” I couldn’t help but think this was a bit of a risky gamble for Sony’s PlayStation brand, which has released original (unscripted) programming in the past, but all of that had been video game related, and largely ignored. No, “Powers” isn’t a brand-new property, as it was first published in 2000, but even though Bendis might be a well-known name in comics today (he was one of the main architects of Marvel’s Ultimate Universe), this isn’t some beloved comic you grew up with as a child. A comic series such as Powers doesn’t have the built-in fanbase of a lesser character such as Daredevil (and Netflix has an upcoming series featuring Marvel’s man without fear), so there will probably be a few viewers going in blind (like I did).

Furthermore, releasing the show through the PlayStation Network was an interesting move in itself; at this point, many companies are throwing their hats into original online programming. A few years ago, there were only a few shows across Netflix, and that was about it. Now, Amazon has a few credible shows and no signs of slowing down, Netflix has a bunch of originals and even Yahoo is even giving streaming a shot, with the sixth season of Community jumping from NBC to Yahoo Screen this week.

But restricting any show to PlayStation Network, and specifically PlayStation Plus users, seems to limit your potential audience. Netflix has 54.5 million subscribers; even if only half of their subscribers watch a particular show, that’s a staggering number of potential eyes.  By contrast, Sony has sold 18.5 million PlayStation 4 units, and about 10.9 million of those PS4 owners subscribe to PS Plus, which gives PS4 users access to online multiplayer, cloud saves and a few free games every month for $50 a year (it’s also available for PS3 and Vita, but not required for online multiplayer). While I’m sure Sony is probably pretty happy with those sales numbers, the fact remains that most people probably won’t be able to watch all 10 episodes of “Powers” as it’s released. (Sony has released the pilot on Youtube, so it’s possible the series could be available there, albeit probably not as episodes air.) 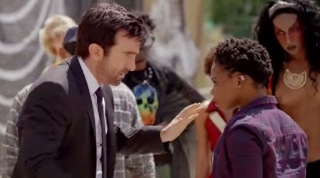 I subscribe to PS Plus, mostly for those free games, but when Sony announced they had optioned “Powers” to the PlayStation Network, I wasn’t going to complain about a free show. Even better, if the first three episodes are any indication, “Powers” looks like it could actually end up being pretty good.

If you weren’t already subscribing to PS Plus, the first three episodes of “Powers” aren’t going to convince you it’s worth the money, but the show is both entertaining and interesting, particularly in the second and third episodes. The pilot is rough and littered with cop clichés: Walker is crusty and doesn’t like doing “cop shit” (seen doing said ‘cop shit’ in the above pic with Pilgrim),  Pilgrim is green and doesn’t think before she acts, Walker doesn’t want to be saddled with a rookie partner … there’s a few of them, and while most are simply easy to ignore, there’s a few moments that are a bit cringe-worthy due to the heavy-handedness in which they’re presented, such as Walker holding up his dead partner’s shoes to Pilgrim and saying, deadpan: “Big shoes.” Ohhh, like, Pilgrim has big shoes to fit? So clever. Ugh. It’s not quite as heavy-handed in the next two episodes, but I’d be remiss if I didn’t mock it at all.

The procedural aspect of the show seems to be mostly in the police investigations carried out by Walker and Pilgrim. A new body pops up, a visit to Dr. Death (the resident Powers doctor) for some snark and clues, and then more investigating. Walker is a bit of an ex-celebrity trying to move on from his time as Diamond, and the loss of his powers obviously gnaws at him. He takes a bit of getting used to, but hopefully he’s developed further as the show progresses. The show’s setup isn’t exactly “Law & Order With Superpowers,” but it’s not really your traditional “superhero show,” or even along lines of what you’d see in “Marvel’s Agents of S.H.I.E.L.D.” The source material is layered, but as of right now, “Powers” seems to struggle with exactly what type of show it is. 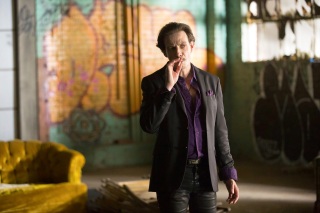 After the pilot, though, the show itself starts to pick up and get interesting, and the few times where it does slow down for some character development, it doesn’t seem to be laughable or wasted time like it seemed in the pilot. Walker isn’t yet an interesting character, outside of knowing he used to have powers, but Izzard provides intrigue in limited screen time (and clothes) and Noah Taylor’s antagonist, Jonny Royalle, commands the screen after his powers are revealed. Heyward’s Pilgrim is frustrating in the pilot, as she keeps screwing up or flying off the handle, but the character seems a lot more relaxed by episode three and even begins to develop a bit of a repertoire with Walker.

I’m a bit more conflicted regarding Olesya Rulin’s character, Calista, a wannabe who is found with the dead Power mentioned earlier, as the series remains ambiguous about her age (it is heavily implied the character is under the age of 18), yet constantly shows her in sexually compromising situations or undress, even as late as in the third episode. I’m not exactly a prude, but if she’s supposed to be a minor, it’s sort of gross to keep showing her in her underwear, even if Rulin is 29 years old in real life.

This show is definitely geared towards an adult audience, with frequent profanity and a lot of sexual themes. Nudity seems to be kept to a minimum, similar to what you’d see on an FX show (where “Powers” was originally supposed to air, although it’s been completely re-shot since FX had any control over it), except for Eddie Izzard (it makes sense in context, but he’s basically naked for the first three episodes).

The special effects aren’t overly impressive, but save for a few instances, aren’t cheap-looking, either. Most of the Powers have abilities with some slight twists on what we’ve come to expect with the more mainstream super powers, which led to fun surprises for me when said abilities would be revealed. Fans of the comics might be disappointed if the interpretations aren’t quite on par with their imaginations, though. Bendis has been heavily involved in the production and scripts, so at least any changes have been creator-approved (if not written).

It’s a tad worrying that the two most interesting characters in “Powers” are, at best, antagonists (it’s a bit too early to cast both Wolfe and Royalle as outright villains yet), so if the show is going to commit to screen time for the Walker and Pilgrim characters, they will need to get a little more interesting than simply advancing the plot of the case. There’s certainly hints of more to come for Walker (who does get likable after the pilot), and Wolfe’s role in the series looks to be expanding as well.

I will likely keep watching “Powers” throughout the first season, as so far, it’s managed to tell a story that feels just unique enough to keep me watching. It seems like it’s building around a mystery of who is creating a drug designed to kill Powers, but there’s enough unknown and new to make it an interesting plot. The acting isn’t terrific yet (save for Izzard and Taylor), but it’s not groan-inducing, and it’s more than tolerable as long as the story stays interesting. For those who have already read the comics, the show is apparently veering wildly from the source material, but I haven’t read the comics much to confirm.

If you have a PlayStation Plus subscription and are looking for some action in your drama, “Powers” is a solid choice, and could even become an excellent show. It’s unlikely “Powers” will be a show worth subscribing to PS Plus for, much less purchasing a PlayStation, but as an extra treat to go with your games, it’s a show worth checking out and watching.

Note: I don’t plan on reviewing “Powers” on a weekly basis, but will review the season after all 10 episodes have been released, to let you know if the show becomes something you need to see.

View all posts by Ed Carroll